Iowa Student And Her Service Dog 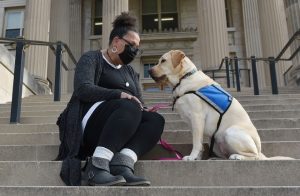 An Iowa State graduate student, Topp had been set to get a service dog, Kashi, in May. But due to complications caused by the COVID-19 pandemic, the process was delayed.

Kashi was trained through Paws & Effect, a program through which inmates prepare dogs for service. The program could take Kashi and her group out but did not have the next group of dogs ready for the inmates. Not wanting to leave the inmates without company as the pandemic further isolated them from the outside world, the program’s director decided to have dogs like Kashi stay within prison walls a bit longer.

“I wouldn’t have wanted (the program) to take Kashi away and not have that person have another dog to be able to have contact with,” Topp said. “That’s a horrible way to treat prison inmates.”

Topp and Kashi were reunited in September and a new batch of puppies entered North Central Correctional Facility in Rockwell City. Amid a statewide spike in COVID-19 cases and another lockdown of the prison, inmates will have the puppies as company this Thanksgiving.

Topp is pursuing a double master’s in community and regional planning and sustainable agriculture. She chose women’s role in agriculture in refugee camps for her thesis, and she aspires to work on Ghanaian refugee camps, a trip delayed by COVID-19, but still part of her plan.

The motivation to go back to school came after a near-death experience and years of medical issues, she said.

“I could die tomorrow, today or in 40 years. I don’t know how long I have,” Topp said. “What can I do as an individual to have an impact because I’m alive for some reason? And so maybe I need to try to fulfill that reason.”

A decade ago, Topp began experiencing seizures that she said feel like a fishbowl is placed on her head and cause her to feel weak and fall to the ground.

After she turned 40, she began to have transient ischemic attacks (TIA), a temporary period of symptoms similar to a stroke. After the first TIA, Topp couldn’t talk for three days.

“When I turned 40, the whole body fell apart,” Topp said.

Two months later, Topp’s primary care provider ordered tests when she did not like the sound of Topp’s cough — despite her tendency to get bronchitis. Doctors found blood clots in her lungs.

“Had she not found them, I would have died,” Topp said. “So she absolutely saved my life.”

Topp applied for a service dog once she could walk and had the energy to train one. She met Kashi earlier this year. Paws & Effect director Nicole Shumate had to make the tough decision to leave the dogs in the prison.

“We’ve seen a lot of benefits from the dogs that come in here,” Bush said. “Pretty much it’s a good calming effect on offenders.”

Despite some of the handlers’ criminal histories, Anderson said, “when I go up there, all I see is just a bunch of great dog handlers that love their dogs.”

Kashi, a yellow lab, has been at Topp’s side for most of the fall semester. The last few months have been dedicated to personalizing the aid Kashi can provide.

Kashi has already alerted Topp of oncoming seizures. Topp is diabetic, and Kashi will be able to detect when she has low blood sugar.

Kashi helps Topp keep track of her medication —  25 pills a day — and she is still working on pressing handicapped buttons, Topp said, among other skills.

“I think overall my whole life is better,” Topp said. “She’s really good at staying with me. When she has her vest on, she knows she’s working, but she definitely still has puppy tendencies. She’s only a year and a half old.”

Shumate said a common misconception is that service dogs are always as austere as they are while on duty.

“When you get them home and take their vest off, they really are a pet dog,” Shumate said. “They are silly and they play with toys and they run around.”

When Kashi has her vest off, she is very much still a puppy, Topp said — and apparently, a diva, according to Anderson.

“She was the star,” said Anderson, who trained Kashi. “Nothing got her down. She wasn’t afraid of anything.”

Topp is looking forward to spending Thanksgiving with Kashi and her family, as well as cooking meals for students who have nowhere to go for the holiday.

Topp urges others with disabilities to pursue whatever they aspire to, whether that’s higher education or another path.