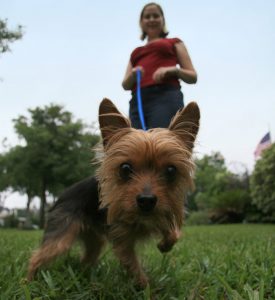 It’s never more apparent dogs are related to wolves than when they snarl, bare their teeth and get into attack mode. Scary, much? Big time. Especially when it happens during a walk with other people—including children—and pets around. Leash aggression in dogs is problematic behavior that can result in your pup harming herself or others. Here’s how to stop leash aggression so you can get back to enjoying those leisurely walks.

What counts as leash aggression?

Sometimes referred to as leash reactivity, leash aggression is intense behavior escalated by wearing a leash. Simple enough, right? Since leashes and walks go hand-in-hand, this nasty behavior will often come out on your daily strolls.

General aggression can look like barking, growling, lunging, pulling and generally trying to run after other dogs or people. Leash aggression is different in that it only happens while your pup is on a leash. Some dogs are perfect angels who cuddle and obey at home but turn into little monsters once you click that leash on.

As with most behavioral conditions, it’s often hard to pinpoint a specific cause or onset. Aggression itself can stem from anger, fear or frustration. For dogs, aggression may manifest after a single incident or not until she’s experienced dozens of similar incidents. However, the following issues frequently cause leash aggression:

How to stop leash aggression

So, what is to be done? First and foremost, you’ve got to pay a visit to your vet. Dogs can have underlying medical conditions that either trigger aggression or cause discomfort, which then leads to aggression.

Also, stay calm during training and walking. Even if your dog gets riled up, remaining calm will signal to her that there is no real threat.

If your pup only exhibits scary behavior while leashed, The American Kennel Club advises removing the walk factor for a while. Simply sit outside with your dog (leashed!) in an area where you’re likely to see at least a few other canines. Bring some treats with you (preferably special ones she doesn’t typically get). The goal at first is to teach your pup to focus on you rather than other dogs. As soon as she notices another dog, offer her the treat. Even if she doesn’t react aggressively to the other dog, continue to give her treats. Shift her focus from them, to you. Get in a few reps on each walk and repeat for several weeks, until she instinctively checks in with you if another dog approaches. Then, add the actual walking part back in, maintaining this practice to continue the behavior.

If starting out in a public space seems impossible, begin this process at home. Along with treats, teach your dog to look at you when you make a specific command or sound. This can take a few weeks, too. The goal here is getting your dog’s attention in any environment, without calling her name.

The Humane Society reminds us dogs greet each other by sniffing genitals. That’s just the way it is! On walks, when two dogs approach each other face to face, this standard greeting is replaced by a much more aggressive one: advancing head on. If possible, alter the route to arc around an oncoming dog to decrease the intensity of this approach. Or, simply turn around and head back the other direction.

Every dog will respond differently to tactics. Some will work better than others. In fact, as Debra Horwitz, DVM, DACVB, and Gary Lansberg, DVM, DACVB, outlined in an article for VCA Ark, even taking a soothing tone when trying to calm your dog could be detrimental. This sounds like praise and she could see it as a good thing when she lashes out. On the other hand, loud yelling, shouting “No,” or using prong collars to control behavior tends to stress out canines even more and will likely increase aggression.