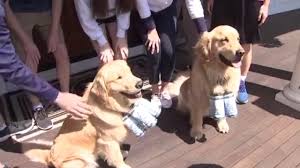 Buddy and Barley are the resident dogs of the Six Harbors Brewing Company in Huntington. Like everyone else, COVID-19 forced the company to do only pickup and delivery. So the owners decided to bring their best buds on all the delivery stops and brighten the day of those who are in quarantine.

The delivery dogs have beer cans wrapped around them (don’t worry, they’re empty), and they have been bringing craft beer and huge smiles to people’s homes for the last two months.

“People were saying, ‘gee, I miss your dogs.’ So we started bringing the dogs on some of the deliveries and we said, ‘hey, why don’t we make this a permanent thing. Why don’t we get the dogs out there in the car with us?'” said brewery owner Karen Ravn-Heuwetter.

Ravn-Heuwetter says she’s getting a lot of requests for surprise gifts and special occasions. “People are having us send our dogs to their friend’s house, or their son’s 21st birthday this past week, and as anniversary gifts,” she said.

The furry helpers have the time of their lives riding in the delivery truck, bringing the empty cans to the front door, before the real beer follows.

“This is the first time I’ve ever had beer delivered by a couple of dogs. It makes the beer extra special,” customer Ken Knowles said.

Another customer couldn’t control her laughter and was nearly brought to tears when she was surprised by Buddy and Barley on her birthday. “This is the funniest thing I’ve ever seen. They’re so sweet,” she said.

It’s an easy job for the dogs and they weren’t hard to train because they love and miss people just as much as customers miss them, Ravn-Heuwetter said.

Buddy and Barley became unofficial therapy dogs, delivering the kind of mid-pandemic cheer you can’t put a price on.

“With what we’re dealing with right now, it’s 5 minutes of happiness which I think a lot of people need,” Ravn-Heuwetter said.