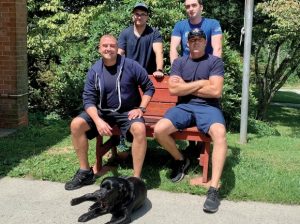 When Asheville Fireman Mark Jameson returned to the fire station after responding to a particularly difficult call, the only thing that lifted his spirits was seeing Denali wagging her tail with excitement upon his return.

“We had a call that was DOA, dead on arrival,” Jameson said. “It was an older woman, lived by herself, no one had seen her for a while, and she passed. It’s a fact of life. But inside her house there were multiple dogs in crates, and they had passed away too because of lack of food and water. That’s a sucky call, no one wants to see that.”

Responding to these kinds of emergencies can be draining and leave first responders in a dark place, but having a service dog like Denali can make all the difference for frontline workers.

Service dog organization called Paws and Effect based in Asheville placed Denali with the Asheville Fire Department in January.

Paws and Effect is a nonprofit organization founded in 2006 in Iowa. Nicole Shumate started the organization initially as a distraction from law school and a way to support children at a local children’s hospital where children would learn to guide dogs through agility courses. Soon parents were asking Paws and Effect to help transition dogs out of service in the hospital to be mobility dogs in the community.

“It wasn’t the initial plan for the organization, so it was just organic. We became a service dog organization,” said Shumate.

Fourteen years later, Shumate has relocated to Asheville and Paws and Effect is a full-blown service dog organization working primarily with veterans, and now emergency service workers, with locations in Iowa and Asheville.

Wade Baker was one of the first veterans to receive a service dog — Honor — from Paws and Effect in 2010. Honor was with Baker until he committed suicide in a police shootout in a Haywood County Church in 2015.

“Prior to Wade completing suicide, we understood the magnitude of our job, but didn’t really appreciate how bad things could get. It couldn’t have become more clear,” said Shumate.

According to Shumate, Paws and Effect is the only service dog organization that has shown up in the media saying that one of their recipients committed suicide.

“Everyone wants to tell the story of this beautiful, spit shine success so that they can fundraise,” said Shumate. “Nobody wants to say that there is this other possible outcome.”

Shumate, who became acquainted with Matthew Allred, partner of the late Justin Mitchell, after she learned of Mitchell’s suicide in April, said that she and Allred are certain Justin responded to the call of Wade Baker’s suicide and shootout.

Shumate decided around that time that the next litter of puppies from Paws and Effect would be dedicated for first responders. Dogs like Denali could be given to individuals or stations.

Shumate said she sees Denali and the next litter of puppies as “a philosophical way to say thank you” to the first responder community.

After learning of Justin Mitchell’s suicide and knowing the COVID-19 Pandemic has put so much stress on the first responder community, Shumate said, “the whole thing takes on a whole heightened sense of purpose.”

Denali went through training to be a one-on-one service dog, but during her training Paws and Effect found that she was better suited for more social environments where she could interact with more people.

“Denali has enough training that she has assumed she is supposed to apply it. I see some of the work she does, albeit it probably looks casual from the outside. She definitely works the room and checks in, she monitors firefighters more than they are aware of,” said Shumate.

“The mental health aspect to me, is what it’s all about,” said Jameson.

According to Shumate, Denali was trained to interrupt nightmares or unusual sleep patterns.

“Firefighters sleep in one, open bay room, so if one isn’t sleeping well, none of them sleep well.  Disrupted sleep and sleep deprivation are two of the things that can contribute to suicidal ideation, so getting and keeping firefighters rested is critical,” said Shumate.

“You can’t prove a non-suicide. You can’t say that having a dog kept somebody from killing themselves. But what you can say is there weren’t suicides, and this could have contributed. You can say, it helped,” said Jameson.

The new litter of puppies will come from the same parents as Denali, and the same breeders as Honor. The puppies were bred on July 1, should welp at the end of August and be ready to go home with puppy raisers by October. Paws and Effect will be looking for four puppy raisers. The puppies will live with that person for around 15 months. Once a week there will be hour-long group meetings with raisers and puppies.