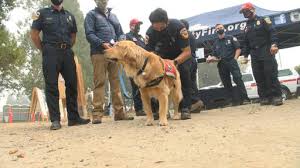 First responders and staff are having their coffee with Donuts for a few days, but Donuts is a golden retriever to bring them some love.

“Her purpose is strictly for the firefighters and the staff. It’s to bring a little bit of home here,” said Tony Pighetti, who’s the Santa Barbara County Regional Support Team Coordinator.

Donuts is a two and a half-year-old therapy dog. She’s trained specifically for veterans and first responders with PTSD or high levels of anxiety. As the Creek fire blazes on, her handler, Tony Pighetti, and the sweet pup hope to provide some relief.

“Trying to make sure that firefighters are strong and healthy, mentally as well as physically and so the dog is one component of that.”

“You put a dog in between you and all of a sudden it’s like oh, you have a dog, I can tell you anything you want to know.”

Pighetti, now retired, gave 30 years of fire service and is honored to give back. He shares why he continues to serve in a different capacity.

“To see the suicide death higher than the traumatic line of duty death–that’s just not acceptable and so that’s what we’re trying to do is to reach people before they get to that point,” Pighetti said.

The two have been together since June, working hard on keeping first responders strong, but it’s not all work with no play.

“When I take the vest off, she is a two and a half-year-old maniac, just like any other dog. She runs around, she does these zoomies, she’s tearing up the garden, I mean she’s a true puppy.”

It’s unknown how long Donuts will be at this location, but so far it’s been a “pawsitive” visit.