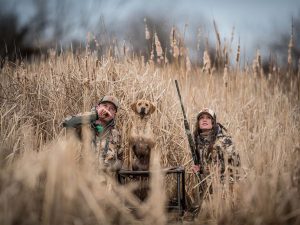 Hunting guides and competitive testers and trailers work hard every day to prepare for the uplands, marshes, and competition. Whether their work involves basic obedience or complex training concepts, handlers focus to ensure success.

But, training is only part of the equation. Physical conditioning and nutrition play an equally important role. To consistently train and condition at a high level, nutrition must do more than provide energy. Kibble ingredients nourish muscles and help support body systems. Helping reduce the amount of free radicals that are the by-product of exercise is important. Free radicals can wear down the dog’s body and fatigue can set in.

For Minnesota-based Josh Miller, owner of River Stone Kennels, a full-service retriever training and breeding facility, focused work and nutrition is integral to success. “We hold our dogs to a tremendous standard,” he said. “We train hard, especially over the summer months because most of our clients have gun dogs. I want to elevate the dogs above and beyond the owner’s expectations as well as any situation the dogs might experience in the field. Dogs get tired going multiple times a day, day after day. But these are canine athletes, and just like professional human athletes, dogs rebound when they’re fueled with the right nutrients. It’s really neat to see.”

That hardcore preseason training requires a very specific approach to successfully prepare dogs for the rigors of hunting, testing and trialing. The better the pre-season conditioning the faster dogs can recover. Dogs that are run regularly, that are roaded, that are exposed to the conditions in which they will work, can develop strong body systems. Their muscular system is strengthened as is their cardiovascular and respiratory systems. Their diet should provide their bodies with the nutrients they need to help them perform at their peak. Strong dogs have the conditioning to handle elevated work levels as well as the mental sharpness to stay focused on the tasks at hand. Without that pre-season preparation, handlers are not hunting or testing. Instead, they’re encountering unfamiliar situations and hoping for success.

For Standing Stone Kennel owner Ethan Pippitt in Kansas, preseason conditioning for his German shorthair pointers includes roading at least four days a week. “We put a lot of time, effort and energy into roading,” he said. “We start our season hunting in Montana. Then we work our way down into Nebraska and finally arrive back home in Kansas. When we roll into guide season, we run four weeks straight working three days on and one off. That aggressive schedule makes it easy for dogs to rack up 15 to 20 miles a day.”

It’s easy for humans to envision pointing dogs as endurance athletes, but retrievers, especially those competing in field trials or hunt tests, need proper conditioning for the demanding and prolonged sprints that come with multiple marks and blinds. Wisconsin-based Benita Otterness, who specializes in Golden retrievers for upland birds, waterfowl and AKC hunt tests, points to the physical and mental demands of those marks and blinds. “When we’re getting a dog ready for a hunt test, it might be shorter marks which don’t require as much endurance,” she said. “But if we’re running a hardcore field trial dog then we could be doing two 20-minute setups. During that session those trial dogs will push 500 yards for up to three marks and run 400-plus yards for blinds. It’s a lot of running for the dogs. But we’re training for that, using crosswinds, casting and lining into the wind, long-water entries and lots of line manners and basic obedience. We’re looking at the twitch of an eyebrow to recognize that precision and teamwork.” That level of mental and physical work demands optimal nutrition to help successfully pull off and repeat daily to prepare the dog for anything that he might encounter afield. Handlers who have run dogs at high levels for a period of time ultimately experience tired dogs. Day one, two and three go great, with dogs performing at their peak. But then later in the week they start to slow down. Their energy levels can be lower, and their mental sharpness can soften. Visible signs are that the dog gets sloppy on finished work. Pointing dogs break point while retrievers miss marks. Those conditions might not be the result of poor training or the lack of conditioning. It may be the result of oxidative stress and the buildup of free radicals.

Oxidative stress can result in free radical production. Free radicals, the by-product of metabolic activity, are a normal part of a dog’s everyday life. Increased workload results in more free radicals being released in the dog’s body.

One way to help with oxidative stress and free radicals comes from antioxidants. Some antioxidants are found in fruits and vegetables. When it comes to dog food, a diet might include Vitamin E, Vitamin C, lutein, beta-carotene and taurine, among others.

Large amounts of free radicals can slow down the rebuilding of cells lost while running and working. By reducing free radical production, dogs may recover more quickly and can be ready for tomorrow. For Miller, who hunts waterfowl 90-plus days a year across the upper Midwest, competes in hunt tests and is the six-time shed-hunting champion, he’s noticed that recovery rate increase with the inclusion of an antioxidant cocktail in the new line of Eukanuba Premium Performance diets.

“Before we weren’t seeing the recovery we’d hoped for. You tend to make excuses … the dog is tired, he worked hard, he needs time to rest and recoup,” he said. “But then it kinda hits ya that it wasn’t those things, it was the food. I’m now seeing a faster recovery time with Eukanuba Premium Performance 30/20 Sport. Dogs that needed two or three days to recover are doing it faster, usually in a day or so.”

Eukanuba pro staffer Otterness has noticed the most dramatic difference in her older Golden retrievers. “For performance, recovery is vitally important,” she said. “I’ve really noticed it in the older dogs that are close to retiring from competition. They didn’t want to run multiple series, especially if they had significant down time in between. Competitive dogs need to be physically and mentally ready to go again; if they’re not mentally ready, then they’re not going to be physically ready. That’s what I’ve noticed: they’re ready to go more quickly both mentally and also physically. I have a 10-and-a-half year old Golden retriever that is still successfully competing at the Open field trial level, which is crazy.”

Recovery from daily work and training is important for a dog to work at his peak. Proper conditioning, regular training and optimal nutrition are all part of a winning combination. Nutrition that contains antioxidants can help recovery times and helps prepare dogs for tomorrow and the days following.