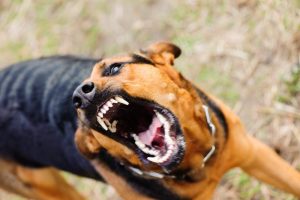 A man flying on Delta Airlines from Atlanta to San Diego says a fellow passenger’s emotional support dog mauled him on the airplane. The man, Marlin Jackson, is now accusing the airline of negligence and is suing both Delta and the dog owner.

Jackson said on a June 2017 flight, he approached his row and encountered a man in the middle seat with a large dog “attempting to sit on his lap.”

“The animal was so large it encroached into the aisle seat and window seat,” according to Jackson’s lawsuit, filed in Fulton County State Court on Friday. According to the suit, Delta policy for large animals states they should be secured on the floor, but employees allowed the dog to remain on its owner’s lap.”The large animal which attacked Mr. Jackson was neither a service animal nor had been verified by Delta to meet the training requirements of service animals,” Jackson alleges in the suit.

Jackson said he asked the passenger if his dog would bite and that he insinuated it would not. Jackson claims he then took his seat, and the dog bit his face several times and pinned him against the airplane window.

“The attacks caused extensive facial damage including deep lacerations and punctures to the nose and mouth,” according to the suit. “In fact, Mr. Jackson bled so profusely that the entire row of seats had to be removed from the plane.”

Jackson said he suffered permanent damage, severe physical pain, and continues to experience emotional distress. He also said he sustained a loss of income or earning potential and lost life enjoyment. His lawsuit says Delta neglected to control the situation and violated its own animal policy.

Jackson is suing both the airline and dog owner for an unspecified amount.

A Delta spokesperson told CBS News the company cannot comment on pending litigation. However, the company “continuously reviews and enhances its policies and procedures for animals onboard as part of its commitment to health, safety and protecting the rights of customers with disabilities,” Delta said in a statement to CBS News.

Delta tightened its policies on emotional support animals in 2018, requiring a “confirmation of animal training” and other documentation, the statement read. In addition to this change, Delta also banned pit bulls and animals under four months old as service or support animals,

The policy changes were made after Jackson’s alleged incident and only applies to flights that are eight hours or longer.