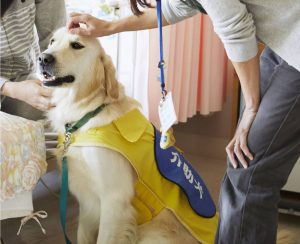 A dog trained to help child crime victims overcome the psychological burden of testifying in court made a rare appearance in an eastern Japan court in July, legal sources said Tuesday.

The 6-year-old golden retriever accompanied a teen girl for some 90 minutes while she was cross-examined during the trial of a man accused of abusing her, according to the sources.

They did not disclose the court name or any other details of the case, citing her privacy.

Courthouse dogs are trained to provide psychological support to children who have suffered trauma from incidents such as abuse so they can overcome the stress that may be caused during interviews by investigators, according to a group supporting the girl and other abuse victims.

At present, there are four courthouse dogs in Japan and the group believes the case is the first in which a dog has appeared in court. Dogs typically provide behind-the-scenes support at welfare centers.

The girl, who initially refused to testify until the court allowed the dog to accompany her, said, “It was nice (the dog) was there,” according to the Yokohama-based group Tsunagg.

Permission for the dog to take the stand with the girl came after the court was presented documents that proved the girl had a mental health condition and a statement from her doctor warning her post-traumatic stress disorder could deteriorate if she appeared in court without the support dog, which had accompanied the girl during interviews with prosecutors.

The courthouse dog system started in the United States in 2012, and there were about 250 dogs operating across the country as of July, according to Tsunagg, which was established in 2019.

“Children who have become unable to trust others as a result of abuse can still trust courthouse dogs that just stay close to them and (help them) feel secure, as they help reduce their mental burdens,” said Mariko Yamamoto, a lecturer at Teikyo University of Science and a member of the Yokohama-based group Tsunagg.

“As it was proven that courthouse dogs are effective in reducing (the mental) burden on children who have to testify at court, we hope (the government) will institutionalize” their attendance, a member of the group said.

Tsunagg stresses the need to train more courthouse dogs amid a growing number of child abuse cases in Japan. As it costs up to ¥2.5 million ($24,000) to train each dog, the Japan Service Dog Association has been soliciting funds through a crowdfunding project.