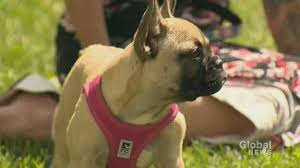 French bulldogs are a very popular family pet but some of their owners believe their puppies were sold to them under false pretenses.

After a Global News investigation looking into a Cote-Saint-Luc dog breeder known as We Love Frenchies, we received numerous complaints from other people with similar allegations.

Melanie Guerard loves her French bulldog Magalia — but she’s still sour over her experience with the breeder.

Guerard says she bought her dog from a company called Montreal Frenchies. Guerard says they claimed her dog was vaccinated.

In a text exchange provided by Guerard, the breeder even offered to have blood tests done to confirm the dog had been vaccinated.

“Sorry for the lack of professionalism, with this pandemic, it’s not been easy,” the text read. “We want to cooperate with you.”

But she says when she double-checked with the veterinarian referenced in her dog’s vaccination booklet, they told her Magalia wasn’t vaccinated at all.

Global News was not able to verify that information as the veterinary clinic in question refused to share the information without the breeder’s permission.

“You feel lost because you want answers and you can’t get them and then you find everything that’s wrong,” Guerard said.

Quebec’s Agriculture, Fisheries and Food Ministry (MAPAQ) says they’re aware of a complaint against the breeder — and are looking into it.

Global News called the breeder, but they refused to comment.

The Canadian Veterinary Medical Association (CVMA) says this type of situation is common.

They say the growing demand for the media-hyped French bulldog is a problem and that buyers often don’t realize that local sellers are turning to breeders in places such as Russia and Ukraine to meet the growing demand.

Additionally, the CVMA says the health requirements for imported dogs are not strict enough.

“There are many, many diseases that we see in dogs that they don’t need to be protected from in order to come to Canada that we are concerned of,” said Dr. Enid Stiles, president of the CVMA. “That could be anything from tick-borne diseases to … diseases like leishmaniasis, brucellosis.”

Leishmaniasis is a parasitic disease spread by the bite of sandflies. Brucellosis is an infectious disease caused by bacteria, usually after the animal eats raw, unpasteurized milk or meat.

“We just really want to really make sure that people understand these issues and again maybe put a little bit of action behind our words to say, ‘Let’s see if the regulators can improve restrictions on transportation’,” said Dr. Stiles.The CVMA says people buying the dogs need to be held responsible too.

Before buying a dog, owners need to do their research about the breeder.

“You should be looking to see the mom and… dad of that dog, you should be looking at the veterinary certificates that come with them, make sure that they are proper,” said Dr. Stiles. “If you question those things, you should be calling the veterinarian that did those procedures and make sure that vaccination was given.” Following the incident in which 38 dogs died on a Ukrainian flight that arrived in Toronto on June 13, the Canadian Food Inspection Agency says that it will no longer issue new permits for the importation of commercial dogs under eight months of age from Ukraine.

The CKC calls that a positive first step, but they believe there should be stronger regulations that allow the safe importation of small numbers of dogs for legitimate purposes while restricting the mass importation of dogs into Canada.

We are “strongly opposed to the mass importation of dogs, which is often done under the cover of rescue,” said Linda St-Hilaire, Quebec CKC board director. “Those dogs end up being sold in rescue facilities which are not rescue facilities.”

MAPAQ says that they are working on the province’s animal welfare regulations but didn’t provide a timeline of when the changes will be delivered.

As for Guerard and Magalia, Guerard is encouraging people to do their research so no one else goes through what they did.