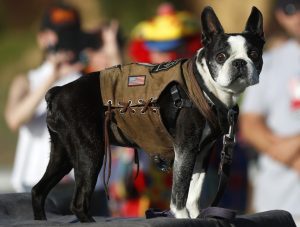 San Diego’s local dog celebrity, Chopper the Biker Dog, has spent much of his 11-year life visiting people in need, whether they lay sick or dying in a hospital, nursing home or hospice.

On Sunday evening, scores of people came to a drive-by parade in La Mesa to do the same for Chopper, who is struggling with his own illnesses and likely nearing the end of his life.

Since then, Chopper has had to undergo several blood transfusions and visit a pet hospital every two to three weeks for blood tests, Shaffer said. Shaffer didn’t hold a birthday celebration for Chopper last year because he thought he might have to prepare for the dog’s funeral instead. The parade for Chopper’s 11th birthday on Sunday was important to Shaffer because he suspects it could be the dog’s last.

“The thought that this might be his last birthday and there’s a time that’s gonna come when he’s not at my side, it’s very sad and emotional,” Shaffer said.

Shaffer, who works as a realtor, has had Chopper since he was 3 months old. He trained the Boston terrier to be a therapy dog and ride his signature radio-controlled chopper bike.

Chopper’s visits have made people smile despite their circumstances and temporarily forget their pain, families have told Shaffer. Chopper is a familiar face at events for nonprofit organizations such as Special Olympics, the Alzheimer’s Association and The Salvation Army.

“That’s what it’s all about… bringing comfort and love and trying to do something positive,” Shaffer said.

Shaffer organized Chopper’s birthday parade to give people a chance to meet Chopper and thank them for supporting him. Shaffer said fans have voluntarily donated to help pay for Chopper’s medical costs, which were around $30,000.

“He wouldn’t be here today if it wasn’t for the support of all his fans,” Shaffer said. “There’s no way I could’ve given him the medical attention he needed.”

Chopper fan Cindy Rapponotti was planning to drive to Chopper’s birthday parade with her husband from her home in Lake Elsinore, because she wants to see Chopper for the first time.

“I really like following positive things out there. There’s so much negativity, I don’t want to fill my mind with the negativity,” Rapponotti said about why she follows Chopper on social media.

Rapponotti’s voice broke as she spoke about Chopper. Her own Boston terrier, Dotty, died about a week ago.

“(Chopper) has given so much and I just wanna be there to help show them that we appreciate it,” Rapponotti said.

Mindy Shelly Johnson, who lives in southern Indiana, said she was part of a group of fans that convinced Shaffer to accept donations for Chopper’s medical care, since Shaffer refused at first.

“(Chopper) gives so much to the community, and we realize his dad is a big-hearted man, and he actually is the one that ‘does’ this,” she said.

Johnson said she clung to Chopper’s social media posts when all three of her Boston terriers died within the span of nine months. She cried when she watched a recent TV news segment about Chopper’s 11th birthday.

“I have to say when (Shaffer) loses Chopper to this disease it will be a very heartbreaking day for me too… as well as every fan of his,” Johnson said.