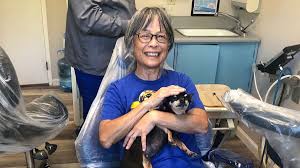 Few people enjoy going to the dentist. But the patients at one dental office in California have a lot more to look forward to than just root canals and cavity fillings.

Kismet, a 13-year-old Chihuahua and a big fan of treats and back scratches, spends her days at Corte Madera Family Dentistry, where she offers cuddles to patients who could use a little stress relief while having their teeth worked on.

Dr. Cameron Garrett, the office’s dentist, and his wife, Debra Garrett, the dental hygienist, adopted Kismet in July. Since then, she’s been a great addition to their family practice in Corte Madera.

“After working so long in the industry you begin to understand quickly you’re just as much of a psychiatrist as you are a dentist,” Cameron Garrett told CNN. “Everybody brings some anxiety or baggage into the dental environment, and the science is very clear. Interacting with an animal, having physical contact with a pet really lowers the blood pressure and heart rate and makes it a much calmer moment.”‘

The sweet dog, who never barks and loves to be held, was a stray rescued by Muttville Senior Dog Rescue. The nonprofit invested thousands of dollars in Kismet, who was diagnosed with heart disease, had a cancerous tumor removed, a hernia treated and had all of her teeth extracted due to periodontal disease.

Her new owners also suspect she was abused at some point in her life — but nothing has stopped her from giving all of her love to everyone she meets, especially children who often come to the office nervous and afraid.

While Kismet is special in her own way, she isn’t the first therapy dog that the Garretts have bought to work.

Five years ago, the couple adopted Karma, a senior dog who eventually became a dental dog for almost four years at the practice. Karma passed away more than a year ago — but before she died, she helped comfort hundreds of patients, starting with a 9-year-old boy.

The child was a patient at the office who was terrified of getting his teeth worked on. So one day, Cameron Garrett asked him if he wanted to hold Karma during his treatment.

“Everything immediately changed. He was so happy, and since then he’s been excited to come to the office to be with the dogs,” Cameron Garrett said. “Seeing the amazing response in him inspired me to look at other people and see if they’d respond in the same way as he did. When dog lovers see Kismet they immediately light up and it takes them away from the stresses of the moment.”

Although Kismet is kept in a cage when people who are scared of dogs visit the office, the majority of patients welcome her with open arms. They especially appreciate her company during these times of heightened stress, the Garretts said, referring to the coronavirus pandemic.

But their patients aren’t the only ones happy to have her in the office.

“Kismet is such a delight. She is the sweetest little thing,” Debra Garrett told CNN. “She makes me so happy. It brings us joy to be working on a patient and see her with us. It makes it nicer for us going to work, too.”