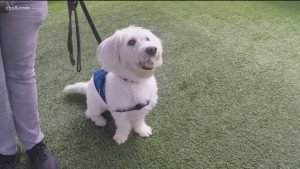 It’s been a while since we last checked in with Buddy and his training to become a service dog for a veteran suffering from PTSD. Because of the pandemic, he’s a little behind schedule, but Shelter to Soldier is still optimistic that a match with a veteran is coming soon.

As a result, it’s hard to get the dogs the training they need around large groups of people, strange situations and noisy environments.

Unfortunately, Buddy isn’t alone. The pandemic has forced the nonprofit’s trainers to get creative to help all of the dogs stay on track, but that’s easier said than done.

Many veterans suffering from PTSD are afraid to leave their home, regularly experience horrific night terrors, and some admit they’ve tried to commit suicide. There’s no question that service dogs from Shelter to Soldier have saved lives, and during this pandemic, their service has never been needed more.

“The isolation is causing even more struggles and challenges than ever before,” the organization said.

It’s been exactly a year now since Buddy was rescued from a shelter and started his training. He has advanced enough to begin what Graham affectionately calls “speed dating” where Buddy meets veterans to see if they’re a good match.

“Things are starting to heat up and get a little bit serious,” he said.

Also getting a little bit serious is Shelter to Soldier’s fundraising concerns. Its 8th annual “Be The Light Gala” – scheduled for August 22 – is now a virtual event.

“This is our largest fundraiser of the year,” Graham said. “It’s what allows us to continue to help dogs like Buddy and other dogs in the program.”