Bella And Her Service Dog 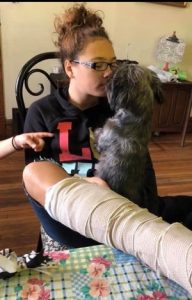 Gisele James has seen the difference.

The superintendent of Par Excellence Academy watched a service dog in the Newark community school help change the life of one of her students, and positively affect other kids in the building. Now, that student, in turn, wants to make service dogs available to other students with social and emotional disabilities who may need one, but may not be able to afford it.

“It (student Isabella, better known as Bella, and her service dog Zoey) has made people so enthused about overcoming the struggles they’ve had,” James said. “Because Zoey is in the building, people come out of their shell. The entire sixth grade class last year flourished. The students focus on the dog, and it alleviates the stress and anxiety they may have gone through. The longer they’re with the dog, the more relief they feel.” Bella, who will turn 13 in November, was inspired to launch I Am Courage, a non-profit. Although held back by COVID-19, it will soon have an application process for parents/children to submit for review by the I Am Courage board for dog training and placement. Until then, they continue to fundraise, and Sunday, Oct. 11 marks a major fundraiser: a poker run that will go through Licking and Muskingum counties.

The first bike out is at 10 a.m. at Mill Dam Grille near Hebron, and the last bike out is at 11 a.m. It will also go to Jugz in Newark, then to Zanesville for The Barn and American Legion, before returning to the Newark Hub on West Church Street by 4 p.m. “It’s not just motorcycles. Anyone can be a part of it,” said Bella’s mother, Lillie McGaha. Cost is $25, which includes dinner at the Newark Hub. Doors open at The Hub at 3 p.m. for non-riders, costing $10 with good and $5 without food.

Along with dinner there will also be a silent auction and 50/50 drawing. Donations have been received from Jugz, Empire Tattoo, Blue Bug Candle Company, Texas Roadhouse, T&T First Aid, Colgate-Palmolive and The Barn in Zanesville. Donations can be dropped off at The Hub or made through the I Am Courage Facebook page. Lillie McGaha, a Tri-Valley graduate and a teacher’s aide at Par Excellence, said her daughter’s story has been inspirational. Bella suffered a trauma and began her recovery, As part of the recovery, she was diagnosed with Post Traumatic Stress Disorder, and it was recommended she get a service dog. Zoey was trained by Jensen McVey of Fetch Dog Training in Zanesville. “She got attached to me very fast,” Bella said.

The dog also quickly affected not only Bella at Par Excellence, but other students. “Normally, students come to us because we’re smaller, do one-on-one and are more nurturing to our students and families,” James explained. “We bring in families, not just the student, and sometimes employ family members.”

Zoey became a mainstay at Par Excellence, with her own Par Excellence shirt and Facebook page. She adjusted very quickly to the class routine and even knew when the kids needed to line up or be quiet. “You could tell Zoey felt like she was part of the class,” Bella said. “She owns the classroom.” Zoey has helped Bella overcome anxiety and now she and Isabella do public speaking on the subject of service dogs and the stigma of mental illness.

“Her first year at school, Bella did not get good grades, and did not talk much,” Lillie said. “But then last year, when she came in with Zoey, she started raising her hand and giving answers. And she stood up in class and gave a presentation.”

Lillie said at first, the other students were uncertain about having the dog around. “But then, everyone started to warm up,” she said. “We had a student last year, even spending 15 to 30 minutes with Zoey helped him. My son has disabilities, and she helps him if he is not having a good day. We want to teach people about service dogs and how they can help. Not all disabilities can be seen. Bella sees the service dog as an extension of herself.”

“My first year, I didn’t talk a lot, but now, I have something to say,” Bella said. “We want a lot more dogs to be available to people.”

She sat in the car one day, thinking about that very thing, then decided to put her thoughts into action. Bella’s parents supported her, and they went to James and Par Excellence administrative assistant Paige Cashdollar Anderson. They were fully onboard with starting I Am Courage. In fact, Anderson, who died in July, was one of Bella’s biggest supporters. “This meant a lot to her,” Lillie said. “She had a lot of struggles of her own, and knew how it felt to have that security blanket.”

Bella then formed a small group of teachers with other members of the community, meeting after school once a month to start fundraising, selecting board members and registering the nonprofit. COVID-19 prevented them from having a fundraiser at the start of summer but a bank account has been started.

“Even with COVID, we’ve stayed focused on Bella’s goal,” James said. “The first place we went to (to get the dog training) was like $3,000,” Lillie said. “We ended up paying up between $800 and $900, by making some sacrifices, but we realized not all families with children recovering from trauma could make those financial sacrifices.”

A big part of I Am Courage’s mission is to educate the public and schools about service dogs.

“People knowing that service dogs are available, is so important,” James said. “And not everyone knows about it,” Lillie added. “It’s such a good comfort zone, having that social emotional support,” James said. “It makes people more social and want to talk to other people.”

More dogs are already being trained by Fetch Dog Training to be ready for use by I Am Courage recipients. “I’m so excited about it,” Bella said. “The feedback we’ve been getting is amazing,” Lillie said. “I was crying the other day, after talking to a woman at the store. You don’t realize how much other people are going through.”

Lillie considers her daughter a superhero. “To have that power from within, from something that happened to you,” she said. “You might have disabilities, but you have that superpower inside, that you can use to change the world. If you follow your dream, it will happen.”