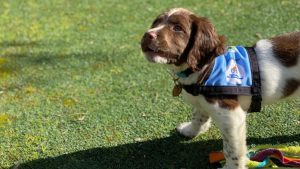 A slight paw to the leg could be the lifesaving alert people living with type 1 diabetes need.

It’s in the realm of possibility, now that SA charity Australian Lions Hearing Dogs is training canines to sniff out and alert to low blood sugar levels, or hypoglycaemia.

As one of the hundreds of thousands of people in Australia who has type 1 diabetes, Eliza Bartlett said having a medical-assistance dog would be life-changing.

“Having a dog that can wake you up and alert others would be not only lifesaving but also something that would just take [away] that pressure and anxiety of having and living with diabetes,” she said.

“I’ve had times where I haven’t woken up during the night because of being unaware of having a hypo [hypoglycaemia]. I’ve had my family basically finding me in a coma overnight unaware of what my body’s going through.

Ms Bartlett said diabetics could struggle with their mental health, because it was such a life-consuming illness.

“Whether it’s the weather, stress, going out with friends and having a drink, everything changes it,” she said.

“Hormones, you don’t get a break and it’s something that’s really exhausting to live with.”

Cody, a working English Springer Spaniel, will be the first puppy to be trained, alongside Millie, who is learning to be a hearing and diabetes dog.

The Diabetic Alert Dog Project coordinator, Laura Harris, who will also be the dogs’ primary trainer, said the training program would be intense.

Cody and Millie are expected to be placed in families within two years.

“The dogs will be trained using saliva samples from type 1 diabetics when they’re having a low blood glucose event,” Ms Harris said.

“So, they’ll collect the samples and they’ll be stored in tubes and then we can use those tubes in the training of the dogs.”

The Australian Lions Hearing Dogs has been operating for 40 years and has so far homed 600 dogs.

The charity’s chief executive, David Horne, said it would be hand selecting people from the local community for the first few diabetes medical-assistance dogs.

“There’s a great need in the community [and] there is no other organisation that will give out diabetic-alert dogs free of charge,” Mr Horne said.

He said the program had been in the works for several years.

“We’ve got an expansion of our facility, which we’ll be looking to triple our capacity of dogs we can hold here in SA,” he said.

“It’ll give us the capacity to deliver over 100 assistance dogs per year, and in that, we feel that we can expand our range and help more people because as a Lion’s project we serve the community.

“They’re not an electronic aid, they don’t just perform the service that they’re trained to do but they perform so much more. So, it’s companionship, it’s security, it’s independence and this is something we’ve provided for 40 years with our hearing-assistance dogs.”

It’s hoped the program will grow to train dogs to help people with other medical illnesses, like epilepsy and seizures, in the future.