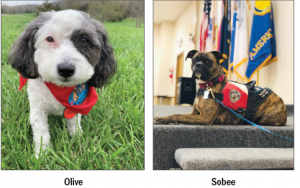 Two local four-legged heroes have been nominated for prestigious awards for their work in the community — and with the help of online voters they could be recognized on national television.

On the competition’s website, people can vote for the dogs in each category once a day. The top three finalists in each category after voting ends May 7 will go to Hollywood for a taping of the award ceremony, which will later air on the Hallmark Channel.

Olive — a friend to all

Occasionally, a little spotted dog in a red bandana can be seen in the Cole County Courthouse.

Olive, a poodle-mix, volunteers as a Court-Appointed Special Advocate for the Cole County Court, serving as a therapy dog for children going through the ordeals of the legal system.

Olive’s owner, Capital City CASA volunteer Lisa Bax, nominated Olive in the therapy category for her work with children who are appointed a CASA — children who are often victims of violence or neglect.

In 2016, Bax started volunteering with CASA, and saw a need for something to help the children in court. She lobbied the CBS TV show “Lucky Dog” for a trained rescue dog to be donated to CASA.

“Imagine having to go to the courthouse for no fault of your own — you just have to be there and you don’t understand. That’s scary,” Bax said. “So these kids, they’re scared, they’re confused, they have anxiety, they don’t understand. Olive is there to greet them when they come, and that automatically gives the sense of a little bit of calm and distraction.”

Having Olive around gives the children a friendly, positive presence during a hearing or while they wait.

“It’s a calming feeling to have something there that’s not going to hurt them,” Bax said.

Olive also attends family support meetings, sits with children during testimonies against abusers and provides any other support the children may need. To date, Bax said they have worked with about 300 children.

“She’s a rescue dog who was literally abandoned in the streets and she’s now living a completely heroic purpose,” Bax said. “She’s a dog that understands what some of these kids are going through.”

When she’s not volunteering, Olive lives life as a regular dog with Bax’s family.

Sobee — from shelter to service

After serving two deployments in the military, Jason Howe returned to civilian life and had trouble adjusting.

Hoping it would help, Howe returned home to Maine to be near his family. There, he ran into an old friend who had a service dog.

The friend connected him with K9s on the Front Line, a nonprofit organization based in Maine that partners trained service dogs with military veterans. Through them he met Sobee, a boxer mix that had been rescued from a shelter in Georgia just two days before she would’ve been put down.

“As soon as they gave her to me, it was like a flip of the switch,” Howe said. “It was an instant bond.”

Sobee is able to help Howe when he starts to exhibit signs of distress.

“If I start shaking or whatever — if I’m getting a panic attack — she jumps up on me, as if to say, ‘Hey, you’re back in the real world. Don’t worry about what’s over there. I’ve got you,'” Howe said. “It kind of brings me back into the now, instead of wherever my mind is taking me.”

She will also sit behind him in public, like at the grocery store, and watch his back when there are people behind him, something that makes him uncomfortable.

Sobee was able to help Howe so much that when he decided to return to Missouri, he wanted to bring K9s on the Front Line with him to help other veterans. Almost two years ago, he founded the Missouri chapter of the organization. They’ve been able to help around 50 veterans.

“I hope both the dogs get to go to Hollywood and walk the red carpet,” Howe said.