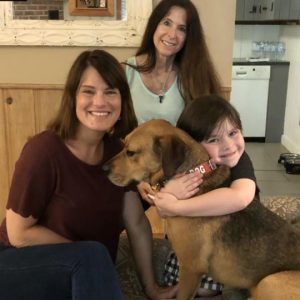 A New Jersey mother’s appeal to get her son a service dog has been answered by strangers.

Her little boy is on the autism spectrum and doctors advised he get a comforting canine, but they are very expensive.

Two years ago, CBS2’s Lisa Rozner covered the family’s story and now has this uplifting update.

When she met 2-year-old Joey Stanley in 2018 he was obsessed with vacuums, and still is. He’s now 5.

And dogs. Not just because they’re cute, but because they can bring him from a state of confusion and chaos to calm.

Joey, who is on the spectrum, would bang his head when he got mad. Doctors recommended he get a service dog.

But Faith Stanley, a working single mom of four, could not afford it with her income. So, two years ago she started a GoFundMe page.

Janice Wolfe, who only lived a few towns away, saw the story, too. It turns out she had started the nonprofit Merlin’s Kids Service Dogs and has trained over 1,000 canines. She wanted to help Faith and Joey.

“It’s kind of like you see a dog or a child and you say oh my gosh, I connect,” Wolfe said.

Over the next two years, Janice would introduce Joey to around eight different dogs to see which one would make the best match. Eventually, a corgi-beagle mix named Boots — because his paws are white — was the one.

“The minute we found him I knew he was a good candidate for Joey because he’s so … almost comatose calm,” Wolfe said.

Merlin’s Kids adopted Boots from a shelter in Missouri and then trained him for a year and a half. Then he came to New Jersey and Faith was trained on how to work with Boots for around three months.

“And Boots would then come and lay down on Joey and put comfort and pressure on him, which Joey loves,” Faith said.

Joey planted a kiss on Boots, adding, “He loves me. I love Boots because he’s so cute. He’s so cute and I love his tail.”

Faith said Boots has helped the family through the pandemic, and added Janice has become a lifelong friend.

It’s important to take good care of Boots, too, so she started making homemade treats, and with Wolfe has started up “Whiskers Barkery,” selling items out of a storefront in Boonton.

The women said the proceeds will go to helping other families find their own Boots.

Faith is now documenting the tales of Joey and Boots and sharing it on Instagram.