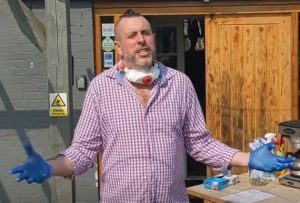 The Dog in a Doublet pub near Whittlesey launched the 24-hour roadside takeaway service ‘McDoggals’ on March 26 to passers-by, such as key workers like paramedics as well as the general public.

John McGinn, owner of Dog in a Doublet alongside wife Della, was preparing for a busy Mother’s Day weekend before being told to shut in line with Government guidelines over the coronavirus pandemic.

But as well as its usual takeaway and delivery service, the restaurant on North Side is offering meals ranging from egg and cress sandwiches to clotted cream scones, as the service continues to grow in popularity.

John said: “It was absolutely devastating, and I tried to think fast what to do.

“McDoggals was set up in response to people, the NHS and paramedics wanting something to get some coffee late at night when nowhere is open.

“It serves the likes of coffee, cold drinks, sandwiches, desserts, apple crumble and custard, all homemade. It is free to all Blue Light workers and people can help themselves.

“The first week was a learning curve but the second week we are rolling.”

Customers have been putting their donations into an honesty box to help the cause, which so far, has totalled around £200.

John has even made his own ice cream and has been asked to make a birthday cake since launching the drive-thru, but despite struggling financially, he is confident the service can still be a success.

He said: “To be honest, we need to take £12,000 a week to break even and we are taking a tenth of that now. We have got enough money to fund staff, stock and that is it.

“I have done liquorice and Horlicks and I have called it Mr Whippet. I am constantly thinking of ideas and getting people to talk about them.

“I have got an amazing team and when it came to lockdown, they all moved in. All we are doing is stocking at the front and for the future.

“It is our livelihoods at risk. We are like a family. Why go and be at risk of coming back to work when we are all here?

“A cup of coffee could go a long way, and I’m not going to charge them. When things hopefully get back to normal, I will have a few customers to carry on.

“I am able to interact with people safely and certainly make more business from myself which keeps things ticking over and providing a service at the same time.

“We make sure it is the best it can be.”